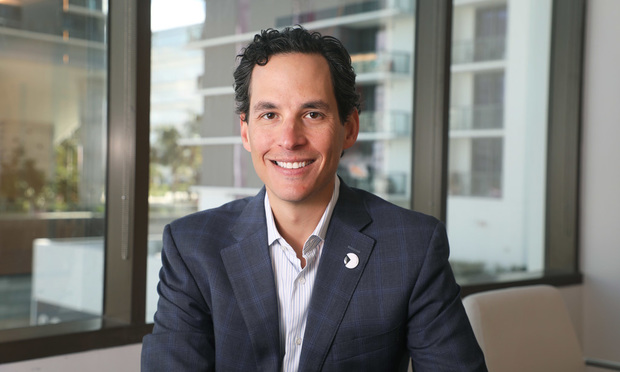 In addition to practicing complex commercial litigation, the Mark Migdal & Hayden partner has accumulated a diverse resume through the years, including stints in the public sector and as an enterprising businessman.

Etan Mark isn’t shy about discussing his failures. Long before founding the Mark Migdal & Hayden law firm with attorneys Josh Migdal and Don Hayden, Mark served as the CEO of iDiligence, a business built on outsourcing legal services, such as document review, to attorneys in India.

“It seemed like a very obvious opportunity for clients to benefit from that kind of a model,” Mark said, noting the similarities between the U.S. and India’s common law systems as well as the sometimes pricey billings that accompany the most basic of legal work. But two years into the endeavor, Mark found himself running out of funds and burning the candle on both ends. He admitted he “was not getting the traction” that he’d been hoping for and opted to close up shop rather than fight fate.

“I had to cut my losses and call it a day,” he said. Even when dealing with disappointment, Mark’s ability to change tack and face the unfamiliar has followed him throughout his legal career. Mark Migdal & Hayden’s status as a boutique law firm specializing in complex commercial litigation has allowed Mark to position himself in an area of constant change and challenge. Where some might find the high stakes of the firm’s work daunting, sudden changes in circumstance have defined the litigator’s life long before he ever stepped into a courtroom.

Mark grew up in an Orthodox Jewish household and resided in Brooklyn, New York, until the age of 10 when his parents separated. With his mother now living in Manhattan as his dad remained in Brooklyn, he split his time between his two parents and the disparate boroughs. Even with a childhood spent in as cosmopolitan an area as New York City, Mark quipped he experienced “a little bit of a culture shock” once he was accepted to the University of Michigan and found himself far from the Jewish community in which he’d been immersed.

“Oh my god there’s all these blondes, non-Jews,” he quipped, mocking his younger self. Upon graduating with a double major in political science and religion, Mark took his talents to Washington, D.C., where he attended the George Washington University Law School with the aim of pursuing a life in politics. However, after interning for the House Judiciary Committee under New York congressman and now-House Judiciary Chairman Jerry Nadler, Mark decided he did not want to go into politics, having found the whole process to be “grotesque.”

“I think I went into law school very, very naive about politics, about public service, and about the incentives for people to do certain things out of law school,” he said. Mark was particularly disquieted by the business of lobbying and the compensation afforded to government employees. “We so grossly underpay our public servants, whether it be the people who are doing pro bono legal work, whether it’s the people who are working for the government in either the state or the federal capacity, across the board.”

Mark’s newfound uncertainty about his career pushed him on the path to becoming a litigator. “Law schools are very heavily geared towards training [students] to be courtroom lawyers,” he noted. After earning his J.D., he spent two years back in his native New York City as a business and securities litigator with Weil, Gotshal & Manges. Mark wound up meeting his wife, Brielle, during his time with the firm, and their relationship soon brought them to Miami.

“She’s from Miami so, the rest is history,” Mark said. Despite the stark differences between New York and Miami’s respective temperaments — “I can get a wedding dress and batteries but I couldn’t get a turkey sandwich,” he joked about downtown Miami — he soon got his sea legs working as a law clerk in the Southern District of Florida under Chief Judge K. Michael Moore. It was after his clerkship that he pursued his iDiligence venture, followed by a nine-year stint at Berger Singerman. By the time he left the firm in 2017, he had worked his way up through the ranks to become the co-head of its dispute resolution team and earn the title of partner. Although he cites firm co-chair Paul Singerman as a mentor, his time at the office wasn’t without its own set of difficulties.

“The expectations are hard, you’re dealing with very stressed attorneys all the time, very demanding clients. … Civil litigation, especially high end commercial litigation, you’re usually dealing with wealthy clients, highly paid attorneys, and as a result of that things are pretty contentious all the time,” he said. However, Mark is ardent in stressing that if it weren’t for the trials and tribulations he’s contended with, he wouldn’t be experiencing the joy of heading up his own law firm or working alongside his partners.

“These are people that every day I learn from, and I wake up every morning realizing how little I know about my job,” he said of firm co-founders Migdal and Hayden. “One
of the very core tenets of this firm is we are only going to work with people we want to work with. Do you have to be an excellent attorney? 100 percent. But if you are not a very good human being … this is not the right place for you. And thank God I’m now in a position where I have some ability to control who it is that I work with.”

The independence and flexibility afforded by Mark Migdal & Hayden has enabled Mark to work on a number of notable cases, including serving as counsel to a prospective class of plaintiffs in a federal suit against dietary supplement company Herbalife. Mark explained the firm is representing contracted distributors persuaded by Herbalife to pour money into company events.

He continued, “[Herbalife] catches these people who tend to be a little bit more on the vulnerable fringes of society, and these people throw all their money into this. … And as a result of that they lose everything.”

Despite the demands of his chosen occupation and the accumulated weight of the past, Mark is hoping Mark Migdal & Hayden can set an example on how to imbue a degree of levity into the legal profession.

“My wish is that lawyers would stop taking themselves quite so seriously,” he said, remarking attorneys “are lucky to be able to exercise our brains every day.”

“I think that we are on the cusp of a really exciting time in the practice of law,” he added. “Because of changes in technology, because of this infiltration of the millennial culture to law firms — which I view as largely a positive thing — which is really driving changes in law firm management, and of course the renewed pressure from clients to make sure that lawyers are truly providing value. We’re at the sort of crest of the wave here. It’s an exciting time to be a lawyer and I think lawyers need to stay positive, and we need to stay excited about what it is we do. And I just think maybe, we should try to be a little bit nicer to each other if possible.”